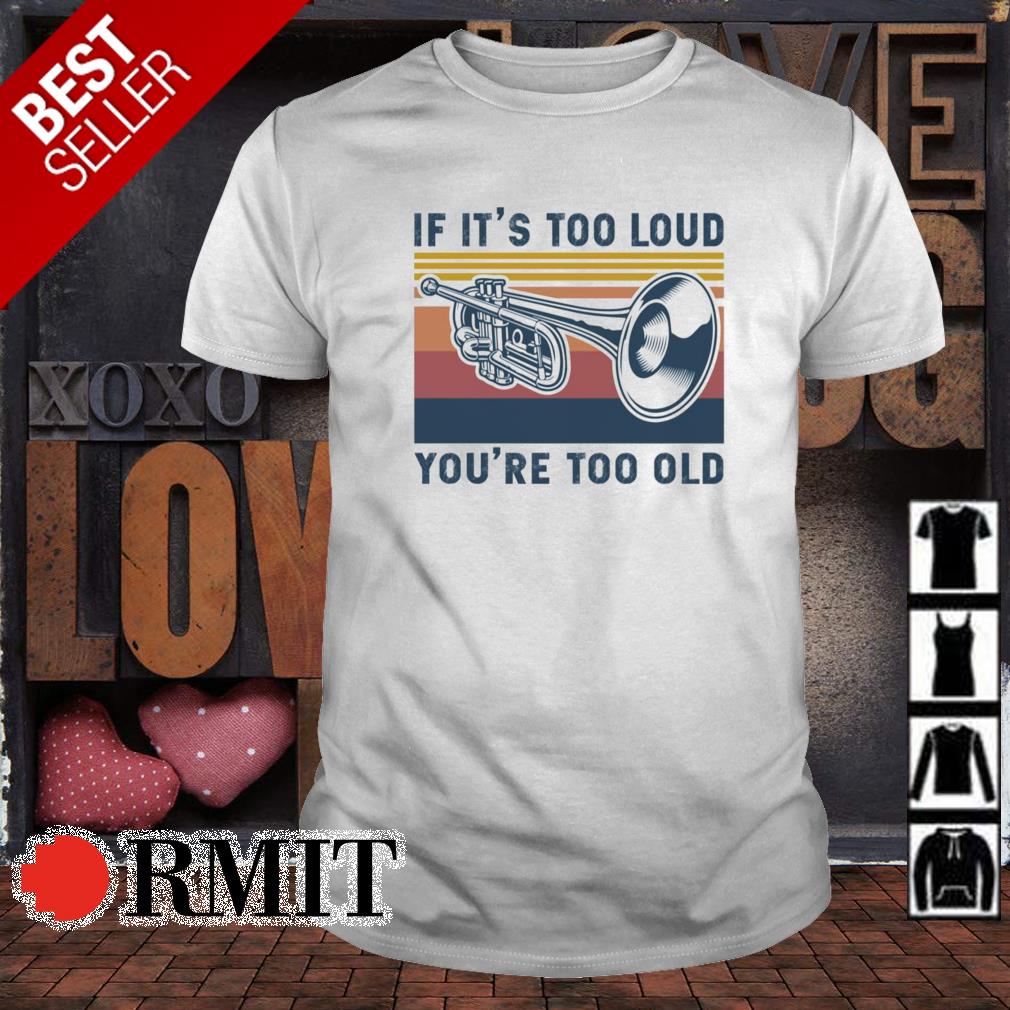 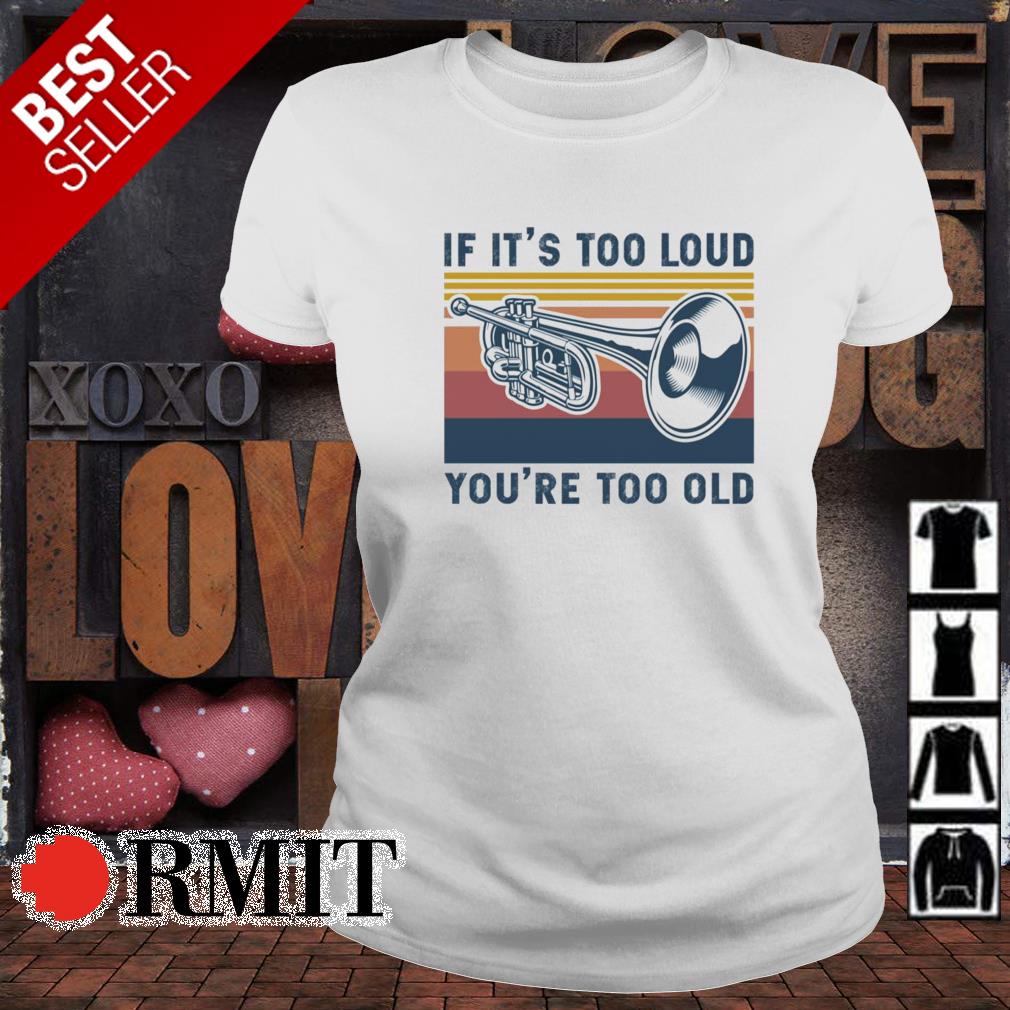 This is just for background. I was still hopeful about patching things up with my ex. We had a nice Thanksgiving with my son, my daughter in law and my grandkids. My ex and I slept in separate beds. Christmas comes around and I’m a Christmas nut. My ex tells me she wants to go to Oregon to spend Christmas with her cousins. Well that was it for me but in spite of that I told myself to wait and see when she gets back to New Orleans. Things were ok until I had to go to Houston on business for 2 days and 2 nights. I ask her to take care of my dog for 2 nights. I took care of her cats when she went to Oregon. She meanly says to me, “I’m not taking care of your dog. We’re separated”. I did not know that’s what she thought. I filed for divorce the Trumpet if it’s too loud you’re too old vintage shirt and I will buy this next week. My wife didn’t work by the way. Her time was spent doing her art. And while some medical professionals predicted that the promising results from the Oxford study could mean the availability of a COVID-19 vaccine by as early as this fall, others urged caution. On MSNBC, Dr. Ashish Jha, director of the Harvard Global Health Institute, said he was definitely encouraged by Monday’s news but warned that people who were predicting a vaccine by fall were being “unrealistic.” He suggested that the chance of getting a vaccine by early 2021 was probably more likely. As a mildly chubby and spectacularly lazy child, I was never particularly into camp. Nevertheless, my parents sent me, in an effort to make me mildly more active: while the other 14 Emmas in my bunk threw themselves into tubing, lanyard-braiding and baking monkey bread, I was more the type to lounge wistfully on my bottom bunk, writing overwrought postcards to my mom and dreaming of all the Lizzie McGuire and Sister, Sister episodes piling up on my TiVo at home. These days, the inherent privilege of being able to attend camp in the first place isn’t lost on me: partially because I’m ever-so-slightly less entitled than I was at ten years old, but also because my pandemic yearning has suddenly taken the shape of desperately wanting to find myself back in a rickety wood cabin, surrounded by friends decked out in braces, camp T-shirts and a veritable rainbow of Soffe shorts.

We were married for 11yrs, together for 16yrs. I was blind sided. I was a homemaker. due to our financial stability with what he made, which we agreed whoever made more worked, believing in one parent stay home/other worked when raising children. I put my all into being a homemaker. I did his extra errands, kept the Trumpet if it’s too loud you’re too old vintage shirt and I will buy this house pristine, kept our children happy and safe. Put him and the children first and above me, which I felt right in doing so. The first years were great. He treated me as any guy would that was in love with his wife. The last few years of our relationship, something seemed off, and when I would ask he would say I was crazy. I had dreams that he was cheating and I would tell him and he would laugh it off. He wasn’t near as loving as before. Before we wouldn’t go anywhere without each other and now he would leave on work trips telling me we couldn’t afford it for us to go too, which was total bullshit. And, yes, before, and during this time we were very physically active with intimacy. Long story short, he comes home one day and says that he wanted to separate just to get his head clear. I didn’t understand, and as numb as I was and shocked, I loved him so I believed in him and accepted it hoping he would do just as he said. A month tops is what he said. What shocked me the most wasn’t the divorce papers sent after, or the emotional emptiness I felt, it was when reading the paperwork questionnaire, he admitted to multiple affairs he had started having towards the end of the relationship, the detailing of each affair, and how after so long of being with him, how cold he turned on me. He left me for a 19yr old at the time they started hooking up, still together. Not that age matters, in truth, just brought on more insecurities with me after having children, family life, etc. My problem, nothing more. Another issue that shocked me was that we were best friends before all of this, and I had to fight him over everything with it came to finances. I did get a full time job, and did what I could, but it was like his human decency or the fact that I was the mother of his children had no meaning. Like I was the one that hurt him.